Here are the results of four “regression experiments” using net job approval using polls of voters from the FiveThirtyEight database. I have removed the 538 so-called “tracking” polls to avoid their having too much influence on the outcome. The final dataset consists of all Presidential approval polls from 1/21/21 through 10/30/22. N=795.

For some reason FiveThirtyEight does not report the type of polling method used as we saw in the generic-ballot polls. Thus I cannot identify whether, say, online polling produces results that are significantly different from telephone polling. Likely voters show no significant bias for or against Biden.1 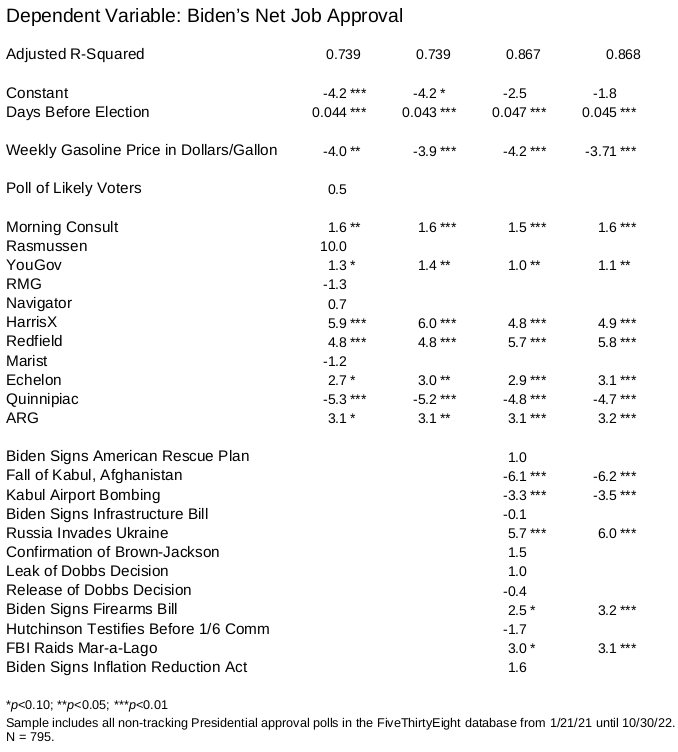 Polling agencies show a remarkably large range of variation. At one end with have Quinnipiac whose polls ran nearly five points less favorable to Joe Biden than the overall polling consensus (as measured by the constant). At the other end we have HarrisX and Redfield, both producing results five or more points more favorable to Biden.

Most events have no measurable effects on Biden’s approval rating. However he lost some ten points as a result of the fall of Kabul and consequent terrorist bombing. Since then events have been more favorable to the President.