Not All Midterms are Created Equal

“Generic-ballot” polls show that the Supreme Court’s abortion decision added nearly five points to the Democrats’ margin. No other events had any measurable effect. Joe Biden’s job approval does influence the margin on the generic ballot, but at a rate less than half the effect measured for Donald Trump in 2018.

Election observers routinely argue that midterm elections represent a “referendum” on the incumbent President’s performance in office, especially during that President’s first term in office. The 2010 midterm remains the poster child for this argument, with the Obama Administration getting “shellacked,” to use the President’s term, losing a net 63 seats in the House that year.

Coming into next week’s election, the Biden Administration seems beset on all sides. To begin with, twice as many Democrats as Republicans announced they were retiring from their seats in the House for a net difference of ten seats. This difference is usually a bellwether for the division of the House in the following election. By that metric, the Democrats were on course to lose some forty seats.1 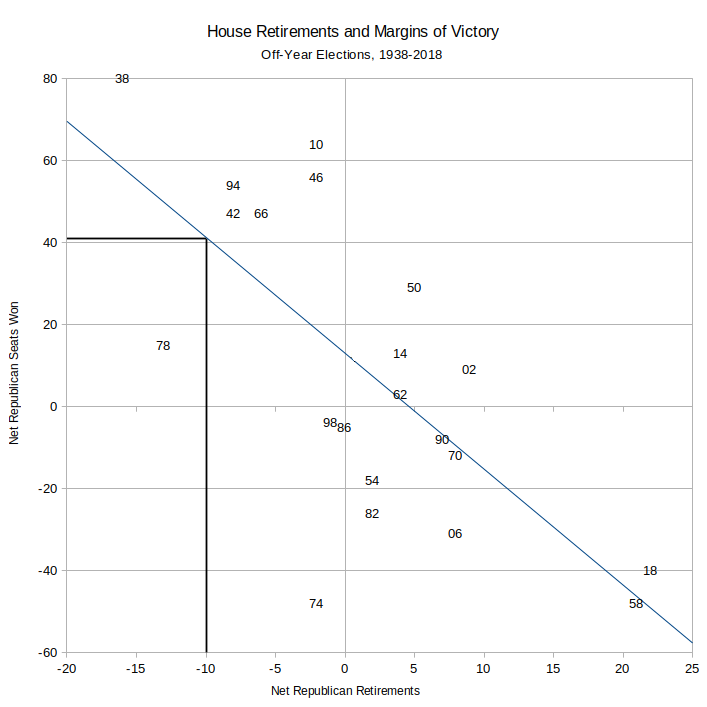 Biden’s first order of business, imposing public-health measures like masking and vaccination, helped to reduce the spread of COVID-19 but roused opponents on the right.  The summer of 2021 ended with the painful withdrawal from Afghanistan that imposed a substantial hit on the President’s job-approval rating. Russia’s invasion of Ukraine last February drove oil prices to levels not seen in decades with a consequent boost to the price of gasoline at the pump, worsening an inflation rate already heightened by supply-chain issues.

In reply, Democrats can point to passing the most substantial legislative agenda since the “Great Society” and civil-rights bills passed by Lyndon Johnson in the 1960s. Democrats have passed two multi-trillion dollar packages that address a wide range of issues including the first substantial down-payment on actions to thwart climate change, a bipartisan infrastructure bill that had eluded Biden’s predecessors in the office, the appointment of the first Black woman to the Supreme Court, and a bipartisan firearms bill, the first in decades.

Despite these various obstacles, Democrats have done surprisingly well in the so-called “generic-ballot” polls that ask people whether they would vote for a Democrat or a Republican if the House election “were held today.” The Democrats led on this measure up until Thanksgiving of last year, followed by a period of Republican dominance that lasted until late this summer when the Democrats again moved ahead. Over the past couple of weeks the Republicans have caught up and now possess a one-point lead in the 538 average.

While poll watchers hang on every little change in numbers like the lead on the generic ballot, this article will ask some broader questions. What factors appear to have influenced that lead since Biden took office? I will address five kinds of factors:

To evaluate these factors, I am using a subset of the generic-ballot polls archived at FiveThirtyEight beginning after Biden took office and ending on October 28th. I have excluded the sixty so-called “tracking” polls from the sample since they can overwhelm the other polls and impose an unnatural stability to the numbers. I then matched those polls to the ones that FiveThirtyEight publishes for Presidential job-approval. Not every generic-ballot poll has a matching approval poll; the final dataset consists of 403 polls where both the generic-ballot and job-approval questions were asked. A more detailed methodology and presentation of results appears here.

Despite the constant refrain that the November election will be a referendum on the Biden Administration, his job approval is only weakly associated with the margin between the parties on the generic ballot. For comparison, a similar model for the 2018 generic-ballot yields a value of 0.30 for Donald Trump’s job approval, over twice the value we see for Biden. Like the figure for Biden’s approval, that 0.30 figure is pretty invulnerable to different model specifications. 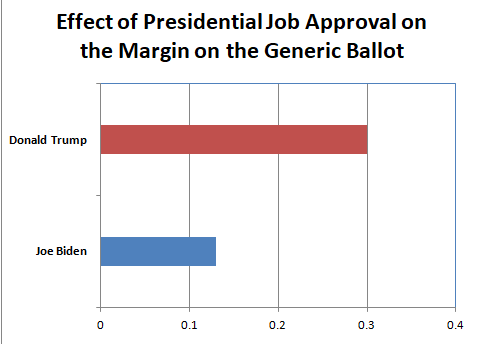 This finding helps explain why, though Biden is as unpopular as his predecessor going into the November election, that unpopularity does not translate very strongly to voters’ preferences when it comes to voting for the House of Representatives.

1The graph presents data for net Republican retirements. So if ten more Democrats left the House than Republicans, that would be a -10 on the retirements measure.