In the states where redistricting maps have been released, Democrats appear to be about ten seats behind the number they would receive based solely on the popular vote for Congress over the past decade.

Now that states have begun to certify their new Congressional maps for the decade ahead, it is time to begin comparing expert predictions of the partisanship of the seats to the estimates I presented in this earlier post. About twenty states have presented enough information that we can start making these comparisons.

I will use the state-by-state analyses presented at FiveThirtyEight.com as my measure of “expert” opinion. They report the number of seats likely to go to either party, and the number of remaining competitive seats. In the results below I have assigned competitive seats a value of 0.5. I use these figures to calculate the extent to which a Congressional map deviates from what we would expect based on state-level voting patterns over the past decade.1 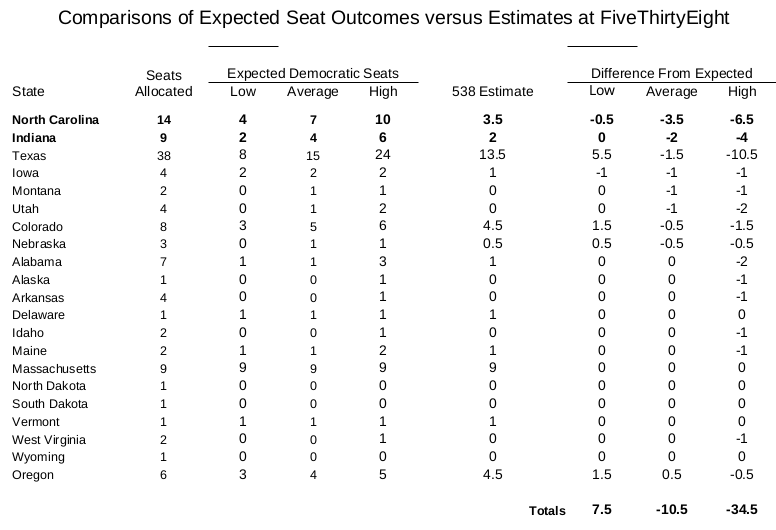 The figures for low/average/high estimates come from the previous post. The low and high values represent the extremes of the “95% confidence interval” around the average value. This method imagines that state legislatures could draw an infinite number of maps and assesses how likely a particular map would be given the state’s voting pattern. For instance, ninety-five percent of those hypothetical maps would create between four and ten Democratic seats in North Carolina based on the House popular vote over the past decade.

North Carolina is once again the poster child for “partisan gerrymandering.” Partisan gerrymanders arise when the partisan division of seats deviates from what we might expect given the division of a state’s popular vote. The results of the 2010 redistricting in that state led to litigation which ultimately came to the Supreme Court. In Rucho v Common Cause, the Supreme Court ruled that the “partisan gerrymandering claims present political questions beyond the reach of the federal courts.” I wrote extensively about some of the arguments raised by this case in earlier postings on this blog.

The Republican-held North Carolina legislature has now passed a redistricting plan that would, by FiveThirtyEight’s analysis, probably result in ten safe GOP seats, three safe Democratic seats, and one tossup. Counting the tossup as 0.5 for the Democrats yields a prediction of 3.5 fewer Democratic seats than the 7-7 split that my model predicts based on the 51-49 Democratic split in the Congressional popular vote over the past decade. Indeed this value even falls below the four seats that my model states as the bottom for the confidence interval, meaning this map is unlikely to have resulted purely from random chance given historical voting patterns. It also violates the “Breyer criterion” whereby parties that win half the vote should also win at least a third of the seats.  On both of these bases it seems pretty clear that the North Carolina plan is facially unfair to the Democrats.

Indiana’s Republican state government has also significantly disadvantaged the Democrats in this round of redistricting. Democrats won 46% of the statewide Congressional vote over the past decade. My model would award them, on average, four of Indiana’s nine seats, but the proposed redistricting plan appears to limit the Democrats’ prospects to just two seats. This value sits right at the bottom end of the confidence interval.

The Texas map has a deficit of 1.5 seats compared to my model, but with so many seats in play, and a popular vote split of 46-54, that figure hardly differs statistically from what we might expect based on statewide Congressional vote totals. Montana, Utah, and Iowa may have shortchanged the Democrats by one seat each. The only state where Democrats might have been advantaged so far by this year’s redistricting process is Oregon, where there is one more competitive seat than we might have expected.

Overall these figures put the Democrats behind by 10.5 seats compared to the results of an allocation based solely on the statewide popular vote for Congress. This figure will probably be reduced once the maps for Illinois, New York and California are approved, while Florida may end up giving the Republicans another boost.

1The logistic model used here differs from the simplified linear model presented earlier. In practice the two methods yield similar predictions except at the extremes. For instance, the linear model predicts the Democrats would win over 100 percent of the seats in Massachusetts given that the Democrats won 82% of the popular vote in House elections since 2010. The logistic model displays diminishing returns to scale as the percentages approach zero or one hundred.