The first new redistricting maps based on the 2020 Census have begun to appear, occasioning the usual questions about whether a state has been gerrymandered or not. Many of these assessments depend on analyzing data at the precinct level, but I want to take a more synoptic view of the process. In earlier postings I have proposed various methods to determine what a fair allocation of seats in each state might be given the division of its popular vote. I have now used a simple logistic model to determine these allocations.

The logistic model uses the relationship

The coefficient β measures the degree to which our first-past-the-post system of elections rewards winners with a greater than proportional share of seats. A coefficient of one would represent pure proportionality; in a state where the Democrats win 55 percent of the vote they would win 55 percent of the seats. Values greater than one mean that our voting system rewards winners with a disproportionate share of seats.

I have estimated this model using data for House elections between 2012 and 2020 from the MIT Election Data project.1 Their data for 2020, which relies on official reports, is missing observations for a few states. In those cases I have used the results for those races as reported by Wikipedia.

In the event, estimating the model above gives values of zero for ɑ and 2.6 for β (R2 = 0.69). Using those values I have estimated the number of Democratic and Republican seats that would be awarded in each state if it the vote was divided between the parties in future elections as it was for elections during the past decade.  Here are the results: 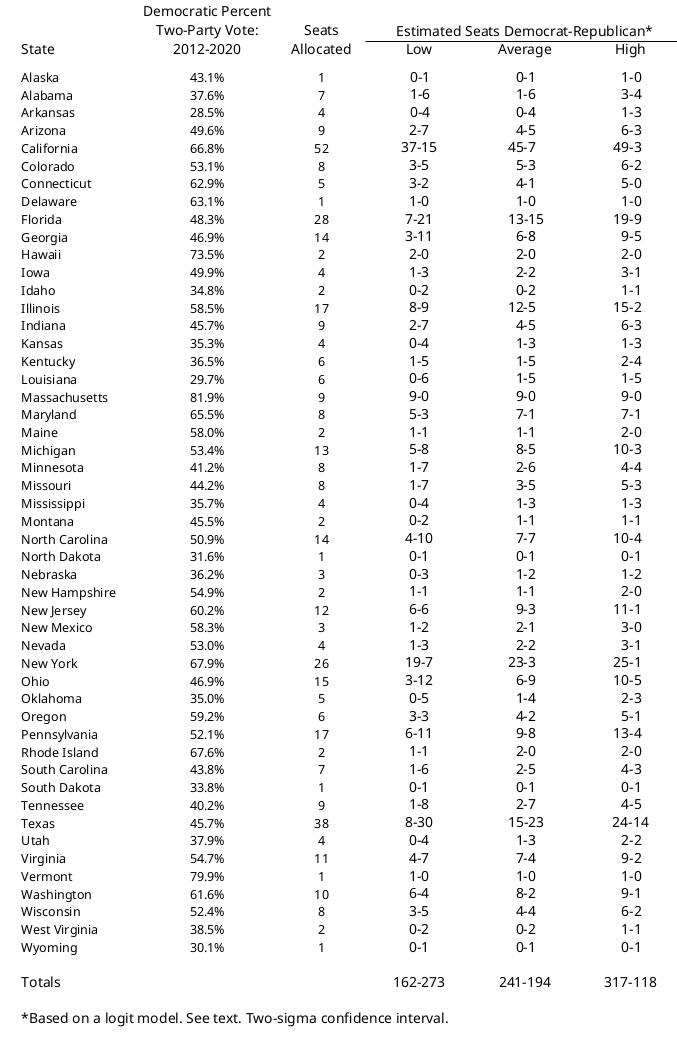 The amount of error in this simple model makes it hard to determine whether a particular redistricting scheme falls outside the range of statistically plausible values.  This is especially true for a large state like Texas whose division of the vote is close to fifty-fifty. The logistic curve is steepest and nearly linear when the predictor ranges between forty and sixty percent. With 38 seats at stake in Texas, the 95% confidence interval encompasses a map where the Democrats win on average just eight seats to one where they win twenty-four. Fivethirtyeight.com estimates that the map signed into law by Texas Governor Abbott last month has thirteen solidly Democratic seats, twenty-four solidly Republican seats, and one they consider competitive. That allocation obvioiusly conforms nicely to my model’s prediction for the state. Hispanic groups have brought suit in Federal court to block the plan, but those suits concern whether Hispanics are properly represented by the new map. Partisan gerrymandering is not at issue in these cases.

Alternatively, states with Democratic vote shares below twenty or above eighty percent are so “red” or “blue” that even incorporating error into the predictions does not change the expected division of the seats. Massachusetts is the poster child here. With nearly eighty-three percent of its two-party Congressional vote going to the Democrats, even under the least favorable circumstances the party is still predicted to sweep all nine seats in the Bay State.

These results indicate that the Democrats should, on average, enjoy a substantial majority in the House based the partisan division of the popular vote in each state during the past decade. Nonetheless, even at the Democrats’ zenith, the “blue wave” year of 2018, they won just 235 seats, six short of my predicted average and nowhere near the high value of 317. I have presented other evidence that the Democrats won fewer than expected seats in elections after the 2020 Census.

I will update this post in the weeks ahead to compare actual redistricting maps with these predictions.

1I calculated the division of the popular vote using the total number of votes cast for each party in the past five elections rather than taking the average of each year’s percent Democrat. This method weights the Presidential years more highly given their larger turnouts. It also gives greater weight to the two most recent elections with their unusually high rates of participation.