A Simple Dynamic Model of US Turnout

Voter turnouts in 2022 and 2024 are likely to run just a bit below their historical high points in 2018 and 2020 but will still be well above their historical values for most of the postwar period.

As partisan polarization grows, turnout becomes ever more important in determining who wins and loses American elections.  With fewer “moderates” or “independents” to persuade, winning or losing depends more on turning out your party’s voters (and suppressing the votes of your opponent).

The last two elections have shown historic levels of voting, with turnout rates not seen for a century.

This graph plots the percent of the “voting eligible” population who voted for the highest office on the ballot in each election starting in 1900. One thing immediately stands out. Turnout spiked in 2018 to fifty percent, a rate last seen over a century earlier in 1914. Then, two years later, turnout in the Presidential election during the pandemic year of 2020 reached 66 percent, the highest figure recorded since 1900. The dates in the chart correspond to historical events whose effects on turnout will be discussed below. 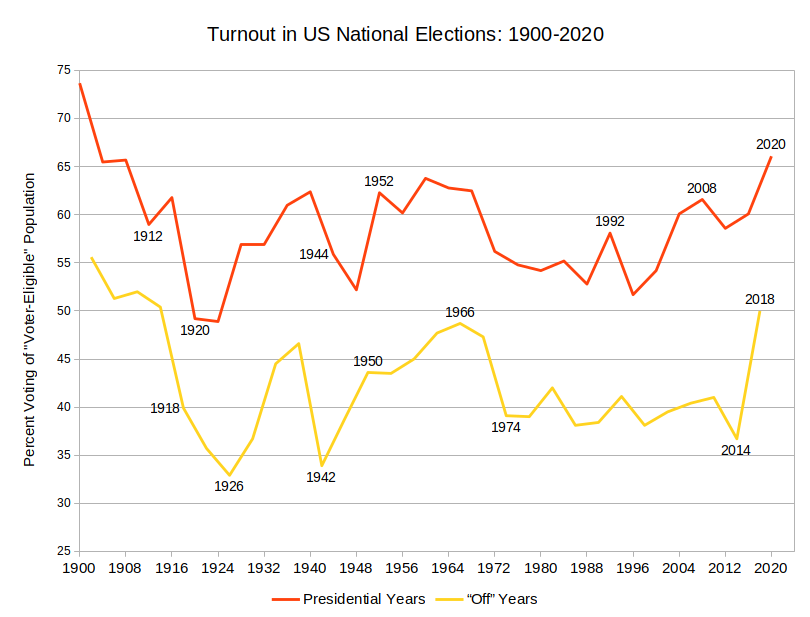 I’ll explore the partisan implications of the growth of turnout in later posts. Here I will build a simple dynamic model of national voter turnout using data back to 1900 and see what it predicts for turnout in 2022 and 2024.

The model is truly simple:  I estimate the percent of the “voting-eligible” population that cast ballots in a given election as a function of that variable in the prior two elections and whether the current election takes place in a Presidential year or an off year. I also include a few “dummy” variables to capture the effects of events like women’s suffrage and wars that have a clear effect on turnout.1 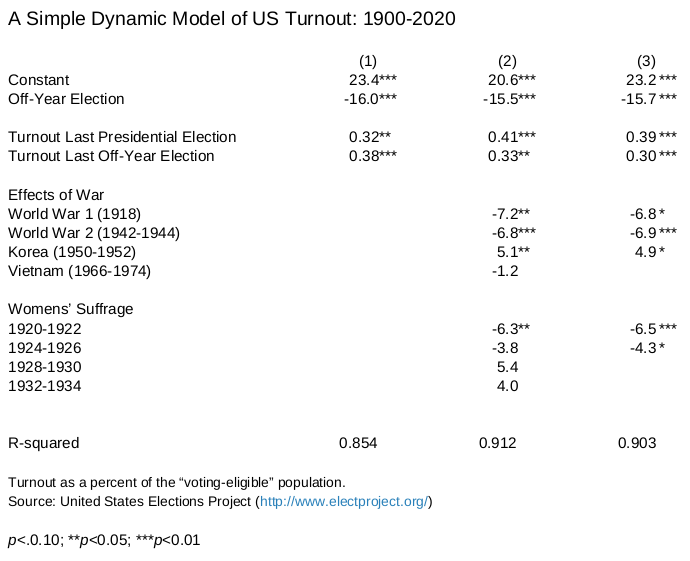 Column one presents the simplest model with no controls for historical events. Adding in the dummy variables for wartime and suffrage improves the model’s predictive ability. Overall about 90 percent of the variance in national turnout rates can be accounted for by this model.

While I am primarily interested in the model’s predictions for 2022 and 2024, the values for the historical events are interesting. Turnout dropped by about six percent when women entered the electorate in 1920. However this effect was short-lived lasting only until 1926. By 1928 suffrage had no visible effects on national turnout.

The effects for wars are somewhat more confusing. I suspect that the relatively large negative effect for 1918 might have as much to do with the influenza pandemic, which reached its peak that year, as with the mobilization of American soldiers to fight in Europe. Turnout during the Second World War declined by about seven percent as well.  The positive figure for Korea is anomalous. Looking at the chart above we find that the 1950 and 1952 elections showed a substantial uptick in turnout compared to participation rates in the immediate postwar years. Some of this growth might be attributed to the restoration of American society after War. No effect was found for our years in Vietnam. Looking at the chart also shows no effect for our wars in Iraq and Afghanistan.

So, overall, we might conclude that turnouts in 2022 and 2024 will run just a bit below their historical high points of 2018 and 2020 but will still be well above their historical values for most of the postwar period.

1Most models I present in this blog use the logistic transformation on percent variables. In this case nearly all the observations fall with thirty-five and sixty-five percent where the logistic curve is essentially linear. I reran all the models using logits instead of percents, and none of the substantive conclusions would be altered.