Two commonly-suggested reforms to the Electoral College — expanding the size of the House of Representatives, or allocating Electoral Votes in proportion to the popular vote in each state — would not have changed the outcome in 2016.

Presidential elections are inevitably followed by calls to change, or even abolish, the Electoral College. One alternative to abolition, the National Popular Vote Interstate Compact, relies on states passing legislation to cast their Electoral Votes for the overall popular vote winner. Right now the Compact has passed in states with a total of 196 Electoral Votes, well short of the 270 required. While the Compact might be a clever method to avoid having to pass a Constitutional Amendment to abolish the College, its fate is in doubt. With only a couple of exceptions, states that have joined the Compact usually vote for Democrats.  Smaller and highly-competitive (“swing”) states have been averse to joining since adopting the Compact would reduce their influence in Presidential elections.

Two other types of reforms often come up in these post-election discussions. One focuses on the re-weighting the voting scheme in the College to reduce the benefit small states receive from the inclusion of the two Senatorial votes each state receives. Wyoming, with a population of about 580,000 people, casts three Electoral Votes (EVs), while California, with over 39 million people casts 55 EVs.  California’s population is 66 times the size of Wyoming’s, but it casts only 18 times as many EVs.  Critics argue this scheme gives too much relative weight to small states when it comes time to count the Electoral Votes.1 One way to dilute the effect of the two Senatorial votes would be to increase the size of the House of Representatives.

A second line of criticism concerns the “winner-take-all” feature of the current Electoral College. There is no Constitutional mandate that a state cast all its Electoral Votes for its winner, and in fact the winner-take-all method was only widely adopted after 1824. (Today two states, Maine and Nebraska, with four and five EVs respectively, allocate their two “Senatorial” EVs based on a candidate’s statewide vote, with their remaining Electors determined by the winner in each Congressional district.) Some reformers have suggested that Electoral Votes be allocated in proportion to the popular vote each candidate wins in a state. So if one candidate wins sixty percent of the popular vote in a state with ten EVs, he or she would receive six Electoral Votes, and the losing candidate would win four.

I’ve examined how each of these proposals might, or might not, have changed the outcome in the 2016 election.

Expanding the Size of the House

The size of the House was fixed at 435 members by the passage of the Permanent Apportionment Act in 1929 when the total population of the United States stood at 123 million people (1930 Census). That meant each Member of Congress represented just under 283,000 people. Since then the population has nearly tripled to some 330 million with the average Congressional district now consisting of nearly 760,000 people.

The House of Representatives is considerably smaller than the legislatures of many other countries. The House of Commons in the United Kingdom, for instance, has 650 members representing nearly 68 million people, for an average constituency size of about 105,000 people. The US ranks 27th in the size of its legislature while ranking 3rd in total population behind China and India.  Some reformers suggest expanding the size of the House of Representatives to improve representation and, as a byproduct, dilute the influence of the two Senatorial votes in the Electoral College.

I have evaluated the effects of expanding the size of the House using the results for the 2016 Presidential election as a baseline. I have retained the winner-take-all rule, but increased each state’s number of Electoral Votes after increasing its number of House seats. For this simple exercise, I have treated the District of Columbia as if it were a state with two “Senatorial” votes, and I have ignored the by-district method in Maine and Nebraska and treated their votes the same as the other states that use winner-take-all.  I examined two alternatives for the House of Representative, one with 650 Members like the UK, and another with 1,000 Members, a figure larger than any current legislature except for China.  Adding in the 100 Senatorial votes, plus two for the District of Columbia, yields hypothetical Electoral Colleges with a total of 752 and 1,102 Electors respectively.

The simple answer is that expanding the size of the House would have hardly changed the results in 2016. Hillary Clinton would have won a larger share of these hypothetical Electoral Colleges, but the size of her gains are fairly small.

Clinton won just over 42 percent of the Electoral College in 2016 compared to 57 percent for Donald Trump. Clinton’s share would have risen to 43.2 percent if the House had 650 Members reaching 43.6 percent in the model with 1,000 Members. Expanding the House before the 2016 election would not have changed the outcome.

Proportional Voting in the Electoral College

Suppose the states had allocated their Electoral Votes in proportion to the share of the popular vote each candidate won in 2016. As it turns out, this method would have thrown the 2016 election to Congress. In Article II, Section 1, the Constitution describes the process that is to be followed if no candidate wins a majority of the Electoral College:

[I]f no Person have a Majority, then from the five highest on the List the said House shall in like Manner chuse [sic] the President. But in chusing the President, the Votes shall be taken by States, the Representation from each State having one Vote. 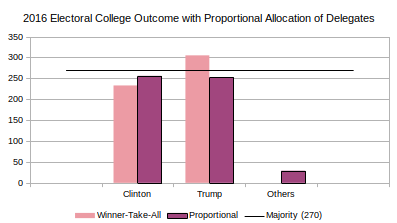 1Scholars have also applied game-theoretic methods to evaluate the weight of the various states in the Electoral College. These methods measure a state’s “power” by counting the number of times a state would be included in a winning coalition. By this method, the large states have the most power. See, for instance, https://digitalcommons.law.villanova.edu/cgi/viewcontent.cgi?article=1780&context=vlr.