I have reworked my model for Senate elections using data for elections in 2016 and 2018. That model relied on three factors to predict the vote for the Democratic candidate:

In the original formulation, the favorability of the incumbent Senator was measured on a “net” basis, favorable – unfavorable, while the measure for Trump support was not.  Since most everyone polled has an opinion about the President’s job performance, the approval rating alone is typically sufficient. Favorable and unfavorable job approval ratings for Donald Trump generally sum to about 96 percent.

Asking about other politicians results in much higher “don’t know” responses. On average the sum of favorable and unfavorable responses for the average Senator in this sample of races is just 79 percent with 21 percent undecided. Net approval only measures the difference between approvers and disapprovers and leaves out the undecideds.

In this reformulation of the model I put the two measures on an equal footing by imputing a net job approval figure for Trump. I have done so assuming the sum of positive and negative figures for him equals 96 percent. Then simple algebra results in the formula

Using net approval for both measures improves the model’s clarity since both scores are measured in the same units, and the constant term reflects the situation where a state has a value of zero (50 approve, 50 disapprove) on both support for Trump and favorability toward the incumbent Senator (and the campaigns are spending identical amounts of money).

One other change I’ve made to the model is measuring campaign spending using logs to the base two rather than ten. Using base two makes the associated coefficient easier to interpret. An increase of one unit in this measure represents the difference between a race where both campaigns spend the same amount of money and a race where one candidate spends twice as much money as her opponent (since log2(2/1) = 1). 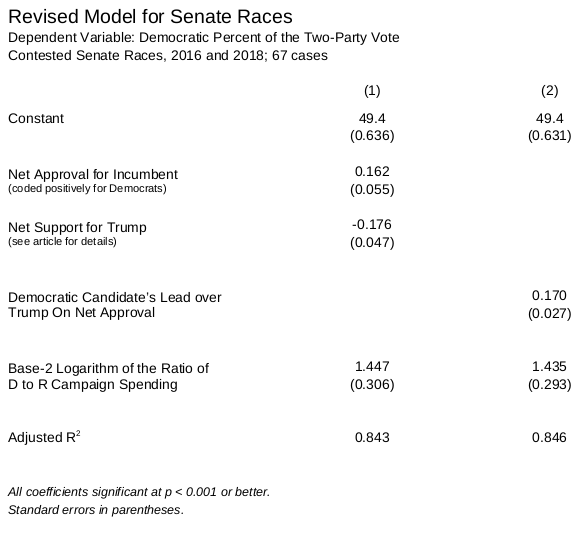 In this formulation we are left with two predictors. One is the difference between the Democratic candidate’s net approval and the same figure for Donald Trump. A Senate candidate who has a six-point advantage over Trump in net approval wins on average one more point at the polls (0.17 X 6 = 1.02).

The campaign spending coefficient indicates that candidates whose campaigns spend twice as much as their opponents can expect to add 1.4 percent to their margins on election day.

In a race where both the net favorability of the incumbent Senator and that of Donald Trump equals zero, and the candidates spend identical amounts of money making the logarithm of the spending ratio also zero, then the Democratic candidate loses the average state with 49.4 percent of the two-party vote. That value reflects the slight Republican tilt of the average state in terms of its vote for Senator.

Which Factor is More Important?