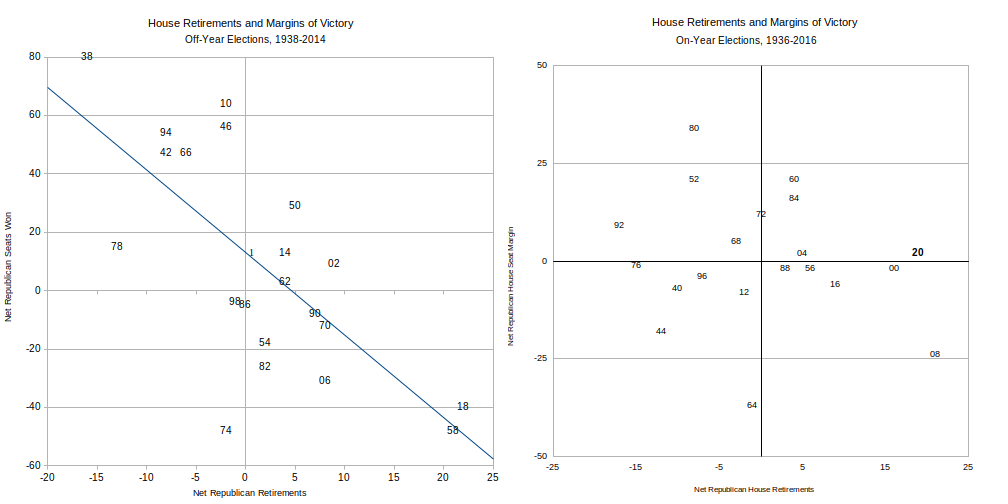 The chart on the right shows there was no systematic relationship between retirements and House results in election years dating back to 1936 when the President is on the ballot. However before we jump to the conclusion that retirements will again not be predictive in 2020, a closer look is in order.

This year 28 Republicans (counting Justin Amash) have relinquished their seats in the House of Representatives compared to nine Democrats. This difference of +19 in net Republican retirements is the second-largest number recorded for an on-year election since the New Deal, just behind the value for 2008. In that year there were 21 net Republican retirements, and the party lost 24 seats. Only the 1964 landslide election between Johnson and Goldwater saw more Republican seat losses.  Might the 2008 result be a bellwether for the result in 2020?

Having as many as 19 retirements from the President’s party in a year when he is running for re-election is extremely rare. Since 1948, net retirements in years when the President is on the ballot averaged just 3.6 (both Democrats and Republicans), reaching a maximum of seven in 1996. That makes it difficult to evaluate the meaning of this year’s net departure of nineteen Republicans.  Perhaps we may not see a “blue wave” result like 2008, with its 21 net Republican retirements and a net loss of 24 GOP seats. But it wouldn’t be surprising to see the Democrats pick up some eight to ten House seats in November.