Some Observations on Biden’s Margin in Presidential Polling

A simple trend model predicts Joe Biden will hold a lead in the polls between 9.8 and thirteen points on Election Day. Biden has increased his lead since the first of the year by a point every fifty days. Were Biden to win by the estimated eleven points, he would carry the Electoral College by 390-148.

Over the weekend I downloaded the complete set of presidential general election polls archived by FiveThirtyEight. For this post I’m going to concentrate my attention on national polls matching up Donald Trump and Joe Biden in head-to-head mock general elections.

Anyone paying attention to contemporary politics knows that Biden has led Trump in recent polling, but the extent of Biden’s margin is impressive when all the polls are taken together. Here are the 265 polls pitting Biden against Trump conducted since January 1st, 2020: 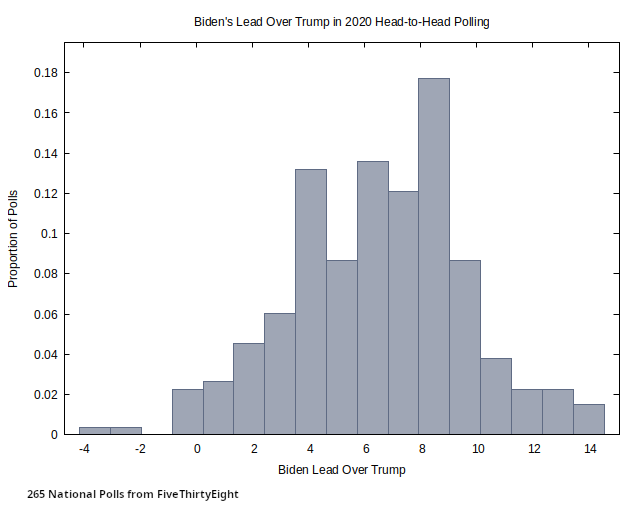 The average lead is about 6.5 points, but more commonly Biden leads by seven or eight points.

Let’s turn now to my standard model for polling data which I have used back to 2008.  This simple model combines the number of days left before the election and various characteristics like the population sampled, the polling method used, and measures of individual “house effects.” 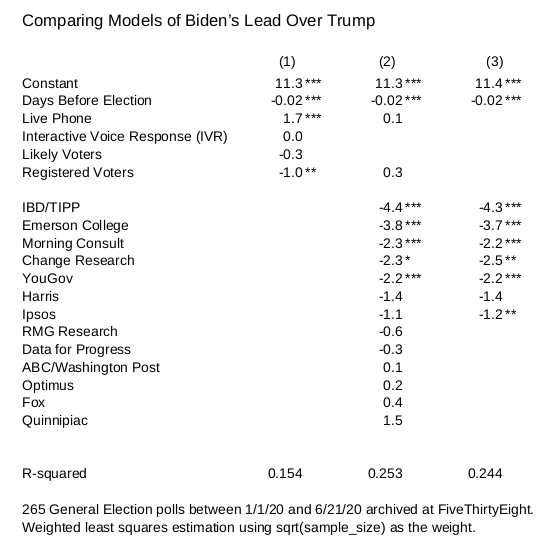 The most significant results from these regressions are the constant term and the coefficient on days before the election.  First, the constant term predicts the size of Biden’s polling lead on election day, when the days before the election variable is zero. If current trends continued until the election, Joe Biden would have an eleven-point edge in national polling.  The standard error for this estimate of the constant is 0.81, meaning the likely range of margins for Biden would fall between 9.8 and thirteen percent.

The negative coefficient on days before the election means that statistically, since the first of the year, Joe Biden has been slowly gaining ground on Donald Trump. However, with a coefficient of just -0.02, it takes fifty days for Biden to gain a full point on Trump.  That comes to just under three points by election day.

In model (1), live phone polls show a small bias in favor of Biden. Some might read this as evidence of “shy” Trump voters who are unwilling to tell live interviewers their true preference for Trump but have no trouble doing so when they are using some form of automated polling. As it turns out, the effect for live interviews goes away once we account for individual pollsters’ “house effects.”  The same is true for the small pro-Trump effect seen for polls of registered voters. It too vanishes when we account of differences among pollsters.  All of the pollsters for which I find significant effects report figures more favorable to Trump compared to the consensus of all pollsters.

It’s hard to understate how big an eleven point lead would be. The implied two-party vote division of 55.5-45.5% would be the largest Democratic victory since Lyndon Johnson’s landslide over Barry Goldwater in 1964.  Given the historical relationship between the popular and Electoral College votes, a 55.5% win in the popular vote translates to a 72% victory in the College, or a margin of 390-148 Electoral Votes.