Senate Elections in a Time of Economic Contraction

The novel corona virus pretty much guarantees that the American economy will decline this year. While the President and most pundits have focused on how a falling economy might affect his re-election, an economy in recession also improves the Democrats’ chances of taking control of the Senate in 2021. A ten percent decline in real GDP translates into the Democrats winning about 53 percent of the national vote for Senate candidates.

Pretty much every forecaster predicts that the economy will contract substantially over the next three months as large portions of the American economy remain idle in the face of the COVID-19 pandemic.  Most of these forecasts are clearly guesswork since we still have only a glimmer about the toll the virus will take on the U.S. economy.  Fortune magazine describes forecasts for the second quarter as ranging from “horrible” to “catastrophic,” with the estimated change in real Gross Domestic Product (GDP) in the range of -8% to -15%.  Morgan Stanley‘s estimate is especially grim, predicting a decline of -38%. Like many other analysts Morgan Stanley expects the economy to rebound some in the third quarter, but the rebound will not be sufficient to overcome the enormous declines of the first half of 2020.  They expect the year to end with real GDP down by 5.5%.

Back in 2016 I constructed a “simple model of Senate elections” that looked at how political and economic factors influence the nationwide Senatorial vote since the War.  Three factors proved to have statistically significant relationships with the share of the vote won by the President’s co-partisans in those years. One of these factors favors the Republicans, the fact that Donald Trump will head the ticket in November.* The President’s party has won, on average, 51 percent of the two-party vote for the Senate in years when the President heads the ticket, compared to just 47 percent in elections when the President is not running.  (This includes both off-year elections, and open-seat Presidential elections like 2016.)

Two factors favor the Democrats in 2020.  One is a weak “regression-toward-the-mean” effect based on the votes won in the Senate elections six years earlier. Senators who win election with an above-average share of the vote in one election are likely to see their vote decline slightly when they run for re-election six years hence.  Republicans did unusually well in the 2014 mid-term elections so we might expect their vote shares fall back slightly in 2020.

The economy also plays a role. My model uses the year-on-year change in real per-capita disposable income as of September as a measure of the state of the economy.  I will use this “simple model” to estimate the effects of the likely recession on the upcoming Senate vote in 2020. 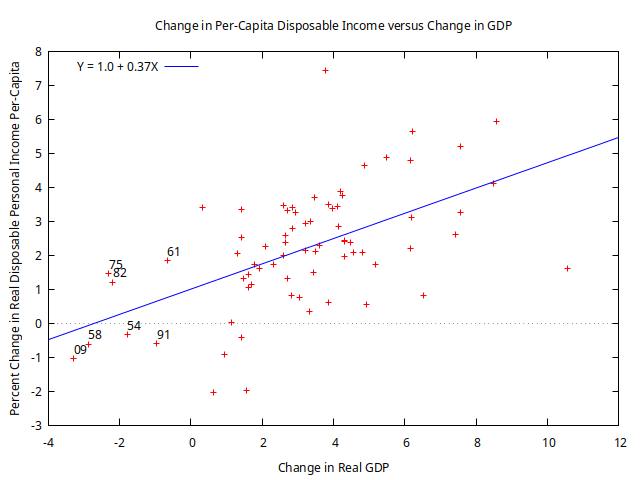 I have marked the seven recessionary years, ones where real GDP fell year-over-year.  One thing to notice is that even when real GDP remains flat, personal income is still predicted to grow by one percent.  Moreover, only 37 percent of changes in real GDP are transmitted to personal income.

I have used this “simple” model to examine how different predictions for the state of economy in November might translate into Senate electoral outcomes.**  The baseline appears on the line below with zero growth in GDP. The Republicans are predicted to win about 48% of the nationwide vote for Senate candidates in such an election. This estimate combines the positive effect of having the President on the ticket with the negative effect of the Republicans’ substantial victory in the 2014 midterm elections where their candidates won 53.5 percent of the two-party vote. In the context of my model those factors predict that the Republicans will win 48.3 percent of the nationwide two-party vote for Senate.

Because changes in GDP are attenuated when translated into changes in per-capita disposable income, even a drop of ten percent in GDP results in a vote for the Republicans that is just one percentage point less than if GDP remained flat. Even if the worst predictions of the forecasters hold true, and GDP falls by twenty percent, the predicted Republican vote falls to only 46 percent.

*Presidential popularity does not appear to play a role in on-year elections, though it does matter for elections held in off-years.

**These results are based on a reestimation of the published model including data for the 2016 and 2018 elections. While the coefficients change slightly, none of the substantive conclusions are altered.