The Politics of Stay-At-Home Orders

On her blog, journalist Marcy Wheeler helpfully tallied the twenty-seven states whose governors have imposed stay-at-home orders during the COVID-19 pandemic. Virginia joined this group late Monday. I have used her data, and figures from Johns Hopkins University on the number of identified cases, to do a quick analysis of the political forces driving the decision to impose such orders.

I used simple binary logit models for these tests.  The predictors include whether each state’s governor and legislature is controlled by Democrats, the February net job approval rating (approve – disapprove) for Donald Trump in each state from Morning Consult, and the number of reported cases in each state as of March 15th and March 30th.  Model (1) below includes all these factors; model (2) includes just the two that proved significant. 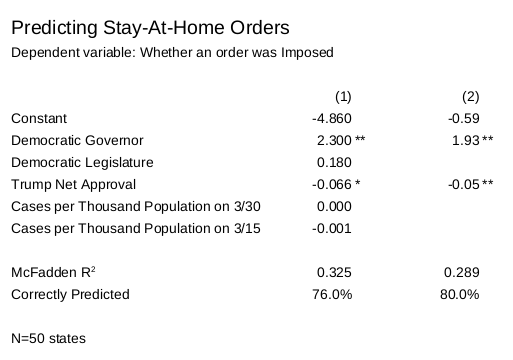 As you can see, only two factors proved nominally “significant,” whether the governor is a Democrat, and Trump’s approval rating in the state.  States with Democratic governors, and those where Trump’s net job approval is negative (“underwater”), are more likely to have instituted a stay-at-home policy. The number of COVID-19 cases surprisingly did not seem to matter.  (Using the logarithms of the number of cases did not improve things nor did looking at rates of growth.)

Using these results, I have generated the predicted probability that each state will have instituted a stay-at-home order and compared those predictions to the actual policies. 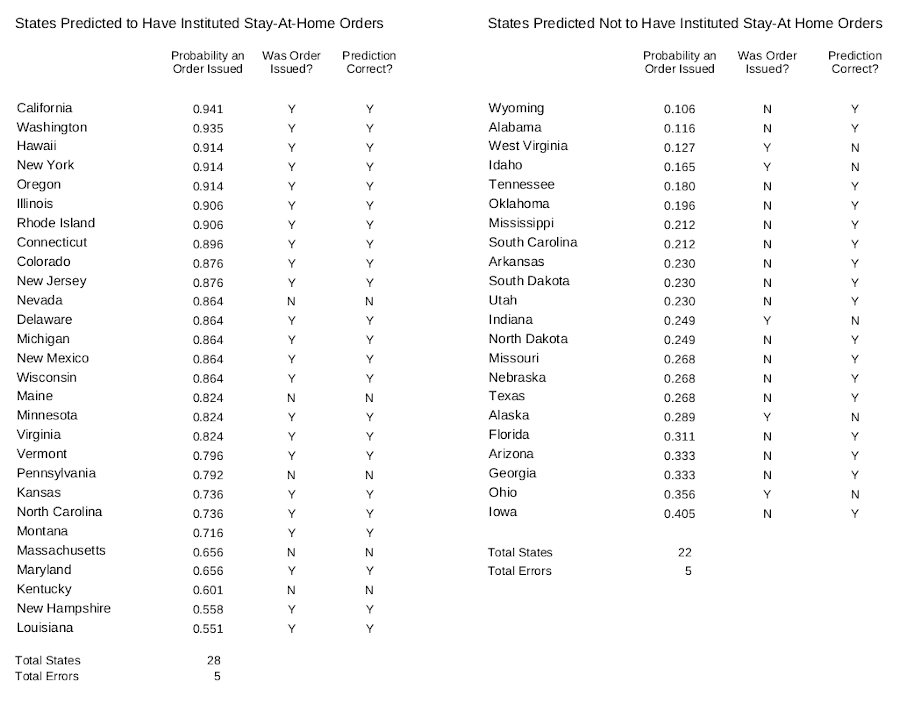 There are ten states where the predicted policy does not match the actual decision.  Thirty-three states are predicted to have imposed stay-at-home orders, but only twenty-eight have done so. Democratic strongholds like California and New York all have predicted probabilities above 0.9. However Nevada, Maine, Pennsylvania, Massachusetts, and Kentucky should all have instituted stay-at-home policies but have yet to do so.  In contrast, the governors of West Virginia, Idaho, Indiana, Alaska, and Ohio have all instituted such policies despite the political context of their states.

We can use the same set of predictors to estimate the duration of a state quarantine. Here I use a “Tobit” model, which handles dependent variables with zero lower bounds. States without a quarantine are coded zero on the duration variable. 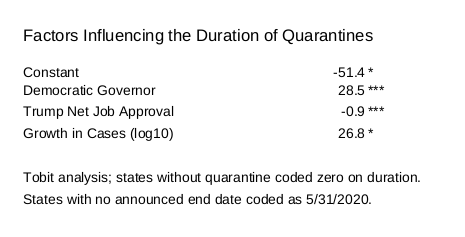 The general pattern here is the same as for whether a quarantine was imposed.  However, the growth in cases between 3/15 and 3/30 has a weak statistical relationship with duration. Because the case figures are expressed as base-10 logarithms, the coefficient of 26.8 implies that a state whose caseload grew by a factor of ten during the latter half of March would impose a quarantine of 26.8 days, other things equal.