Senate campaigns that outspent their opponents by two-to-one in 2016 and 2018 typically gained a bit over one percent at the polls. Spending by outside groups, and the “quality” of challengers, had no measurable effects.

My earlier model of recent contests for the U.S. Senate relied entirely on two measures of popularity, the favorability score for the incumbent Senators in their states, and support for President Trump in those same states.  While those two measures alone explain 81 percent of the variance in the vote for Senatorial candidates, the model obviously lacks a few important items, most notably data on campaign spending and on challenger “quality.”  In this post I add measures of both these factors.

For campaign spending I have used the figures reported to the Federal Election Commission and compiled by OpenSecrets.  I chose to use spending rather than funds raised because in most cases campaigns spent nearly all of what they raise, and sometimes more. For instance, here is the record for campaign spending in the 2018 Missouri Senate race where incumbent Claire McCaskell lost to Republican Josh Hawley, then Attorney General.

The other major source of campaign financing is, of course, spending by outside groups.  Here, OpenSecrets separately reports funding in support of and opposed to each candidate.  My measure of outside spending adds together monies spent supporting a candidate and those spent criticizing her opponent. I use the base-10 logarithm of spending which has a better fit to the data and incorporates the basic economic intuition of decreasing returns to scale. 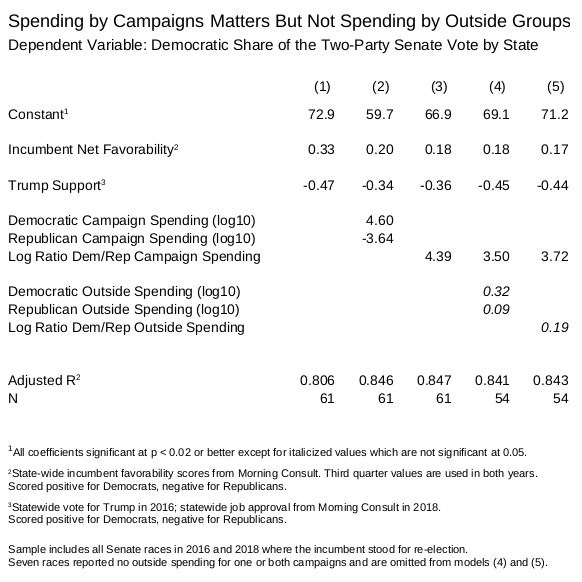 Spending by the Campaigns

I first added the campaign spending figures for Republicans and Democrats separately with results as shown in column (2). Democratic spending appears to have had a larger effect than Republican spending, but a statistical hypothesis test showed the two coefficients were not significantly different in magnitude. So in (3) I use the difference between the two spending measures, which is equivalent to the base-10 logarithm of the ratio of Democratic to Republican spending.*

An increase of one unit in these logarithms is equivalent to multiplication by ten. So the coefficient of 4.39 tells us that a ten-fold increase in the Democrats’ spending advantage would improve their share of the two-party vote by somewhat over four percent.  While a ten-fold advantage might seem implausibly high, some races have seen such lopsided spending totals. In Alabama’s 2016 Senate election Republican incumbent Richard Shelby spent over twelve million dollars on his race for re-election; his Democratic opponent spent less than $30,000. In that same year, Hawaii Democrat Brian Schatz spent nearly eight million dollars while his opponent spent $54,000.  These sorts of drastic imbalances typically appear in non-competitive races where the incumbents are seen as shoo-ins to retain their seats.

To see more intuitively how spending affects results I have plotted the predicted change in the Democratic vote for various ratios of Democratic to Republican spending.  The state codes represent the seven most competitive races as identified by my model. (I will examine the implications for 2020 in a separate post.) 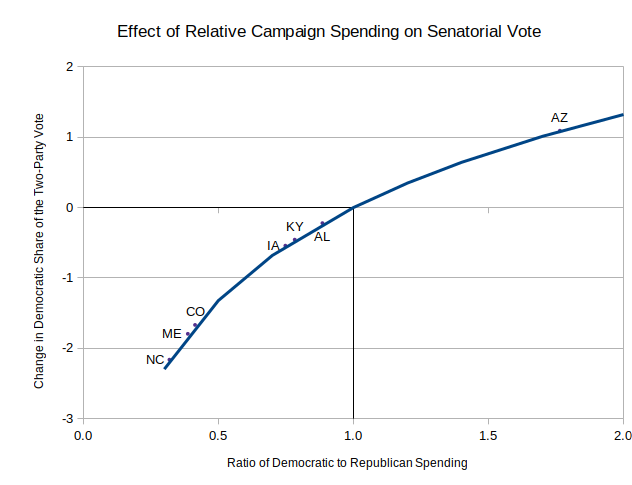 In states where the Democrats outspent the Republicans by a ratio of two-to-one, the Democrats were rewarded on average with an increase of about 1.3 percent in their vote shares.

Spending by Outside Groups

In sharp contrast to the results for spending by the campaigns themselves, I find no systematic influence for spending by outside groups. Neither including separate terms for pro-Democratic and pro-Republican outside spending as in model (4) above, nor including the difference between those figures in model (5), displays significant effects.

While I’m not ready to make strong claims for this rather surprising finding without an expansive review of the literature on spending in Senate campaigns,1 I don’t find the result all that surprising. Since outside groups may not, by law, “coordinate” with the campaigns they support, these groups must focus their attention on television advertising, direct mail, and other messaging strategies.  Perhaps these strategies simply are not as effective as they once were, as demonstrated by the Presidential primary candidacies of Michael Bloomberg and Tom Steyer. They both spent hundreds of millions of dollars on television advertising but garnered few votes on election day.

Another common factor used to explain legislative elections is the “quality” of the challengers that choose to take on an incumbent. While some people launch vanity Senatorial campaign to make themselves better known to the public at-large, most Senatorial bids are undertaken by people who already hold elective office at either the state or the Federal level.  I have coded the backgrounds for the challengers facing each incumbent in my dataset of 2016 and 2018 elections.  They fell into four categories — current or former Members of Congress, current or former members of the state legislature, governors and others who have held state-wide office, and a miscellaneous category that includes local-level politicians like mayors and non-politicians like activists.  I find no statistical effects for any of these categories either separately or in combination.

We are thus left with a model of Senate elections that includes three factors — the incumbent’s net favorability, the state’s level of support for Donald Trump, and the ratio of spending by incumbent and opposition campaigns.

1I have since discovered this article examining television advertising in Senatorial elections using data for the 2010 and 2012 elections. The authors use a novel technique that compares adjacent counties that reside in different media markets. Overall, they find significant effects on vote share for negative (but not positive) advertising by the candidates and no effects for advertising by PACs. This paper by political scientists John Sides, Lynn Vavreck, and Christopher Warshaw find significant effects for television advertising in Senate races, but again they find like I do that the effects are small. A change from -3 standard deviations to +3 standard deviations in advertising produced just a 1% change in Senate races. They do not analyze the effects of spending by the campaigns versus that by outside groups.