The Democrats have a decent chance to take control of the Senate.

I have updated my Senate predictions using the fourth-quarter, 2019, favorability data for Senators and February, 2020, job approval ratings for Donald Trump. Both come from Morning Consult.  I have also cleaned up a few errors in the earlier data used to estimate the model’s coefficients. Here are the updated results: 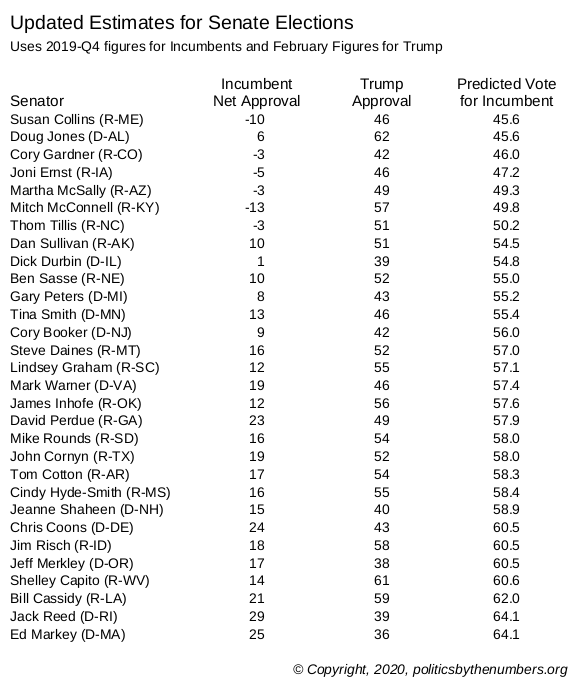 Maine’s Susan Collins now joins Alabama’s Doug Jones as the most-vulnerable Senators up for re-election.  Both Senators face adverse political environments in the states they represent.  Mainers don’t care for Collins very much, and they’re slightly negative when it comes to Donald Trump. Unlike Collins, Jones is liked by a plurality of Alabamians, but Trump is liked so much more that it overwhelms Jones’s personal popularity.

Steve Bullock’s musings about running against incumbent Montana Senator Steve Daines find little support in the data here.  Both Daines and Donald Trump have positive ratings in Big Sky Country, with the Senator predicted to win re-election with 57 percent of the vote. Jaime Harrison also faces a pretty uphill quest in his bid to oust Lindsey Graham in South Carolina.

If these estimates were to hold, the Democrats stand a good chance of flipping the Senate in November. If Jones, Collins, Gardner, and Ernst all lose, the Democrats would net three seats. That would create a 50-50 tie and require the Vice President to be decisive.  Also defeating one of McConnell, McSally, or Tillis would give the Democrats a 51-seat majority.