My earlier model of recent Senatorial races relied entirely on two measures of popularity, the favorability score for the incumbent Senators in their states, and support for President Trump in those same states.  While those two measures alone explain 81 percent of the variance in the vote for Senatorial candidates, most students of Senate elections would say this model is under-specified because it lacks data on campaign spending and challenger “quality.”  In this post I partially rectify that problem by including campaign spending, which often indirectly measures candidate “quality.” High-quality challengers in competitive races usually succeed at raising money, so measuring spending proxies challenger quality.

I have used the base-10 logarithm of total campaign spending for the 2016 and 2018 Senatorial elections as reported to the Federal Election Commission and reported by OpenSecrets.  I used spending rather than funds raised because In most cases campaigns spent nearly all of what they raise, and sometimes more. Here are the results of adding the spending figures to the model presented in October. (Only elections where the incumbent was running for re-election are included.) 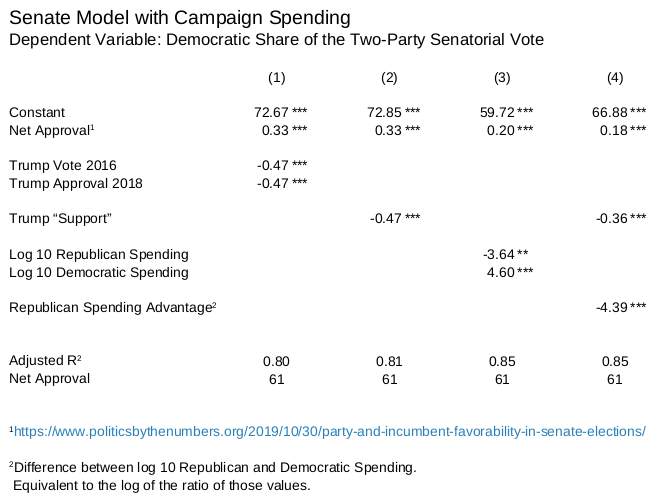 I first added the spending figures for Republicans and Democrats separately with results as shown in column (3). Democratic spending appears to have had a larger effect than Republican spending, but a statistical hypothesis test showed the two coefficients were not significantly different. So in (4) I take the difference between the two spending numbers, which is equivalent to the base-10 logarithm of the ratio of Republican to Democratic spending.*

An increase of one unit in these logarithms is equivalent to multiplication by ten. So the coefficient of -4.39 tells us that a ten-fold increase in the Republicans’ spending advantage would reduce the (two-party) percent won by the Democratic candidate by somewhat over four percent.  While a ten-fold advantage might seem implausibly high, some races have seen such lopsided spending totals. In Alabama’s 2016 Senate election Republican incumbent Richard Shelby spent over twelve million dollars on his race for re-election; his Democratic opponent spent less than $30,000. In that same year in Hawaii, Democrat Brian Schatz spent nearly eight million dollars while his opponent spent $54,000.  These sorts of drastic imbalances appear in non-competitive races where the incumbents are generally seen as shoo-ins to hold their seats.

This chart plots the change in the Republican Senatorial vote by the ratio of spending for the GOP candidate compared to the Democrat in each state.  Because the relationship is logarithmic I predict “decreasing returns to scale” from each additional campaign dollar.

In states where the Republicans outspent the Democrats by a ratio of two-to-one, they should expect to be rewarded with an increase of a bit over one percent in their vote shares. A ratio of three-to-one predicts about a two-percent increase in the Republican share of the vote.

Obviously we don’t yet know how spending in 2020 will develop, but we do have the campaigns’ reports on their receipts, spending, and cash-on-hand through the end of 2019.  Of these measures cash-on-hand is probably the most predictive since campaigns largely spend all the money they have available. The seven most-competitive Senate races are marked on that chart and listed in this table:

Using this limited measure of spending, we can identify two races where money might matter. Thom Tillis has a commanding lead in cash-on-hand over his Democratic opponent, Cal Cunningham. Adding a two percent increase in vote share to Tillis’s predicted 48.8 percent turns a losing race into a winning one. In Arizona former astronaut Mark Kelly had nearly twice as much cash available at the end of 2019 as appointed Republican incumbent Martha McSally. Kelly’s spending advantage could flip McSally’s seat to the Democrats.

This report includes only monies raised by the campaign.  In an upcoming report I will evaluate the effects of PACs and other outside groups.