Thirty-six percent of 18-49 households with a man present own guns as compared to just sixteen percent in households with no man in residence. Gun ownership has persistently fallen across the generations, but the proportion of people who own a gun in any specific cohort remains fairly stable over the cohort’s lifetime.

With the release this week of the results from the 2018 NORC General Social Survey it seemed a good time to revisit my analyses of gun ownership patterns across the generations. This table replicates the ones found in those earlier reports with the sample expanded to include all interviews from 1972 through 2018.

Here are the ownership rates for households based on the respondent’s age cohort, or “generation,” and the respondent’s actual age at the time of the interview.  This method lets us see differences among generational cohorts and also measure how gun ownership changes as people age.  There are few representatives of “Generation Z” in the newest data, those who born in 1997 or later and came of age beginning in 2006. 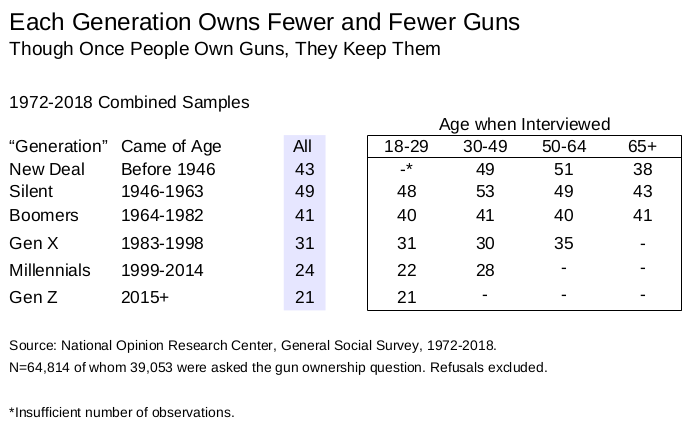 Once again the major findings are clear. Gun ownership has persistently fallen across the generations, but the proportion of people who own a gun in any specific cohort remains fairly stable over the cohort’s lifetime. Ownership falls off among the elderly, in part because men, who are more likely to own guns, have a shorter life expectancy than women.

The oldest generations have shown little change in gun ownership rates as their members aged. That may not be true for Millennials who may be buying guns as they get older.  Even with that uptick among the oldest Millennials, they still remain below their Generation-X forbears.

Pretty much all this growth in ownership among Millennials took place in households with a man present. Left to their own devices, women are much less likely to own a gun. This table presents the rate of gun ownership by type of household.  I have limited it to adults 18-49 interviewed in 2000 or later.  This pool of younger, more recent respondents represents the future of gun ownership. Thirty-six percent of younger households with a man present own guns as compared to just sixteen percent of households where no man resides. Married households show the highest rates of gun ownership, but unmarried men own guns at nearly the same rate. At the other end of the spectrum, single, unmarried women, and all women with children, have especially low ownership rates of just thirteen and eleven percent. In stark contrast, twenty-three percent of households with two or more women living alone together own guns. That is not a statistical anomaly; it is based on a sample of 833 households and is significantly greater than the 11-13% figures for the other two groups.

While the National Rifle Association and other gun-advocacy groups have targeted women over the past few years, these results suggest their efforts have not borne much fruit among the younger women in this country.